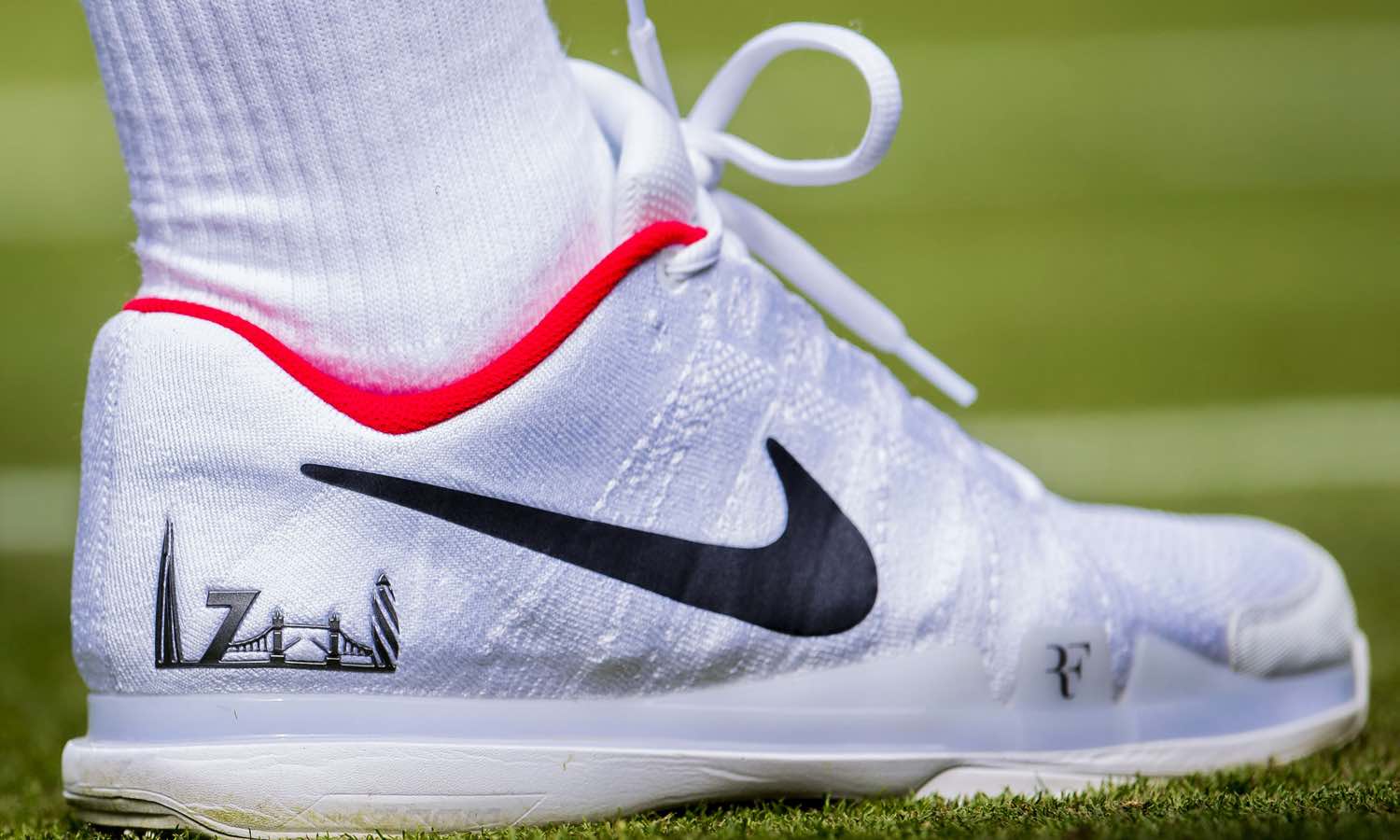 Put the racquets away and down that last Pimm’s. Wimbledon is drawing to a close for another year.
Hopefully no hip op for Andy. That will be music to the ears of those on Murray mound.
Before champions are crowned this weekend, it’s time to praise the trend setters of 2017. If you were following the competition this year I’m sure you will know exactly who I am referring to. 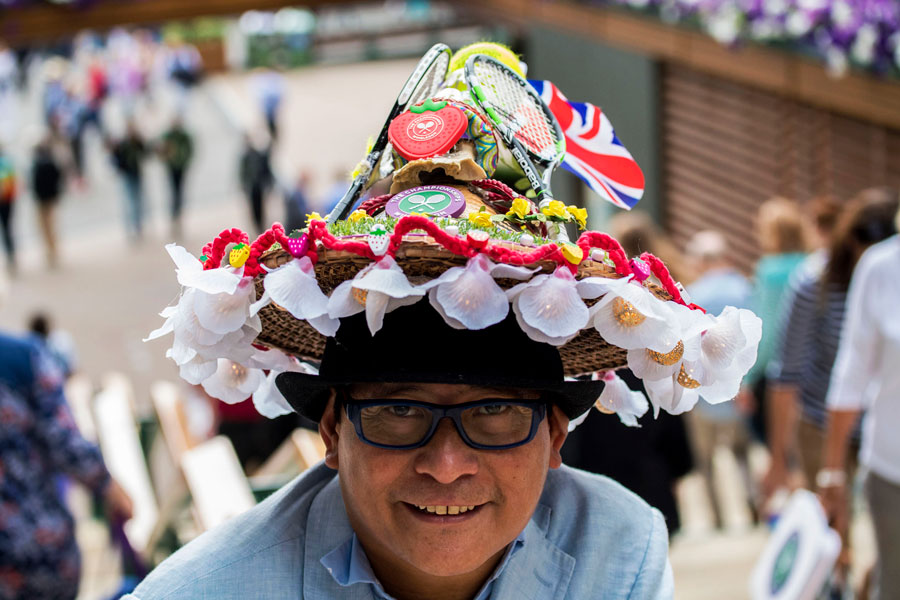 NO. Not him! Although kudos to this guy for effort, right?

The style I’m referring to is on the court.

In the sporting industry we know whether it’s an NBA superstar and their sneakers or footballers with their multi coloured boots style is a pretty top priority. But in recent years we’ve even witnessed a spike in trendy golf gear. I mean Ricky Fowler at the Abu Dhabi Championship repping those Puma high-tops with the jogging trousers? Cue Gene Sarazen yelling “What are those?!” from his grave. It was only a matter of time until the clean-cut tennis players stepped their game up too and flirted with fashion and Wimbledon 2017 has been the perfect showcase for those who did!

To appreciate the style trends of this year’s tournament we can break it down into a few simple categories; 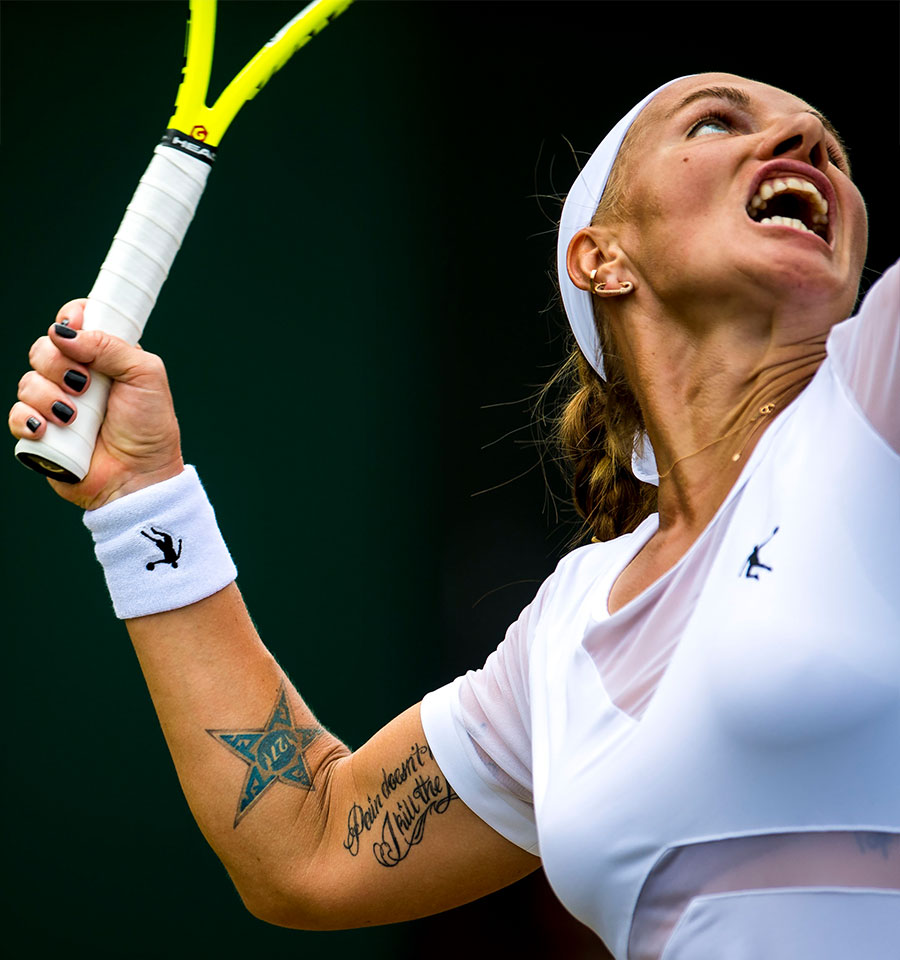 Surfers personalise their boards, guitarists cover their Fender with artwork and tennis players decorate their arms with ink.

Their perfect white clothing may say “Daz advert” but those tatts scream “Miami Ink” and that’s a contrast I can get down with. Looking through the photographs there was a definite rock star edge to Wimbledon with the art on the limbs of players this year. I mean, I was kind of left wondering if Polona Hercog and Svetlana Kuznetsova have been working on their smash shots or dropping their first smash hit but either way they’ll do their thing covered in some sick designs. 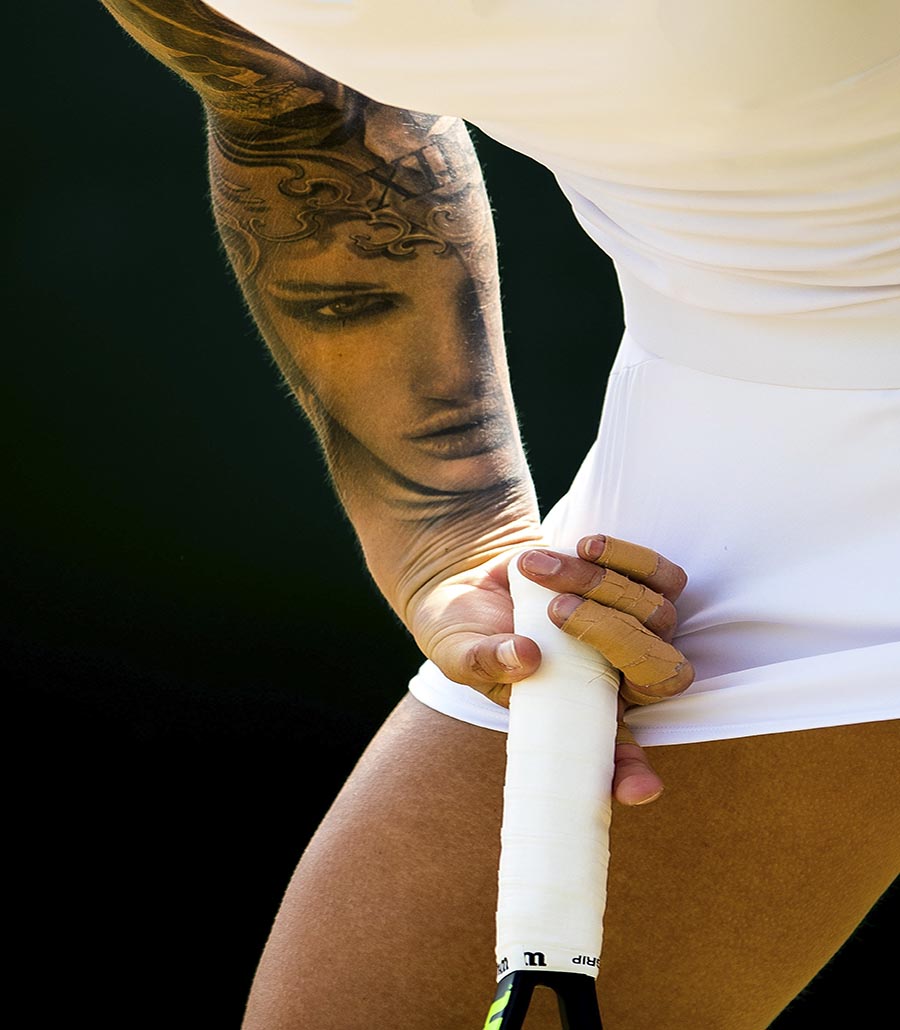 The Sneaks
When it comes to Basketball there’s no denying Steph Curry and Lebron James take their kicks pretty seriously. We may know Wimbledon for the classy, plain white ensemble but there’s always those athletes who sneak in the quirks. ENTER Roger Federer. The man who never misses a trick to match his ticks (try saying that after a few Pimm’s). Through-out his Wimbledon victories, 2003 or 2012, not only is he rocking a pair of Nikes on his flippers but their tick will carry the theme of his whole outfit.

If this isn’t ringing a bell perhaps the mention of 2009 will jog your memory. The year Rog won Wimbledon, Hammer style. All gold everything.

Watching this year’s Wimbledon further confirmed for me that Federer is the dark-horse of the trainer game with these beauties as the stand-out. 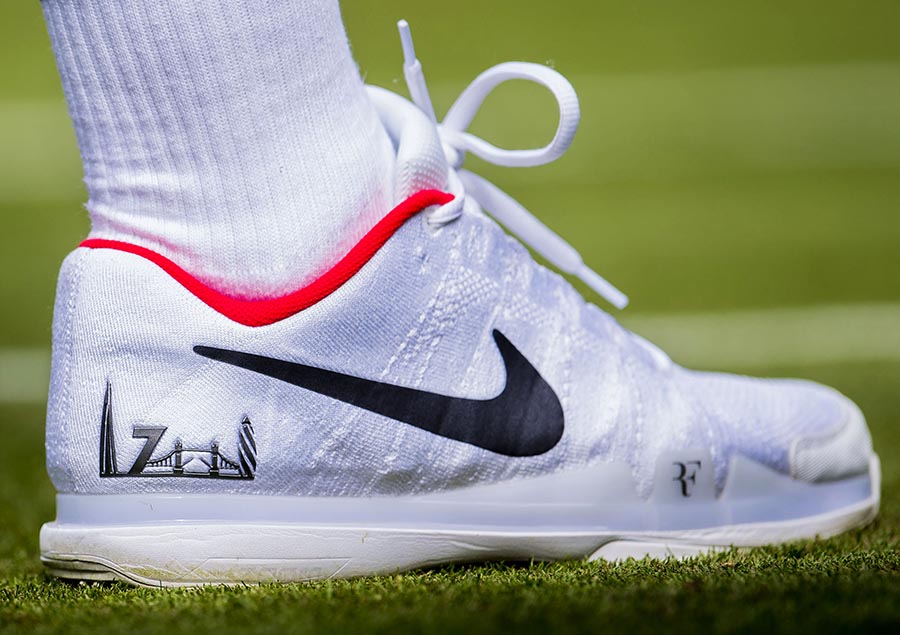 Our man Andy Murray may have kept it clean shaven this year but others brought a whole lot of face-fluff to the court. Whenever any of my guy friends embark on the quest for a beard I always find myself wondering which celebrity beard they have in mind for their stubble to aspire to.

As my top two beards of the tournament I see no reason not to treat Fabio Fognini and Benoit Paire the same way. 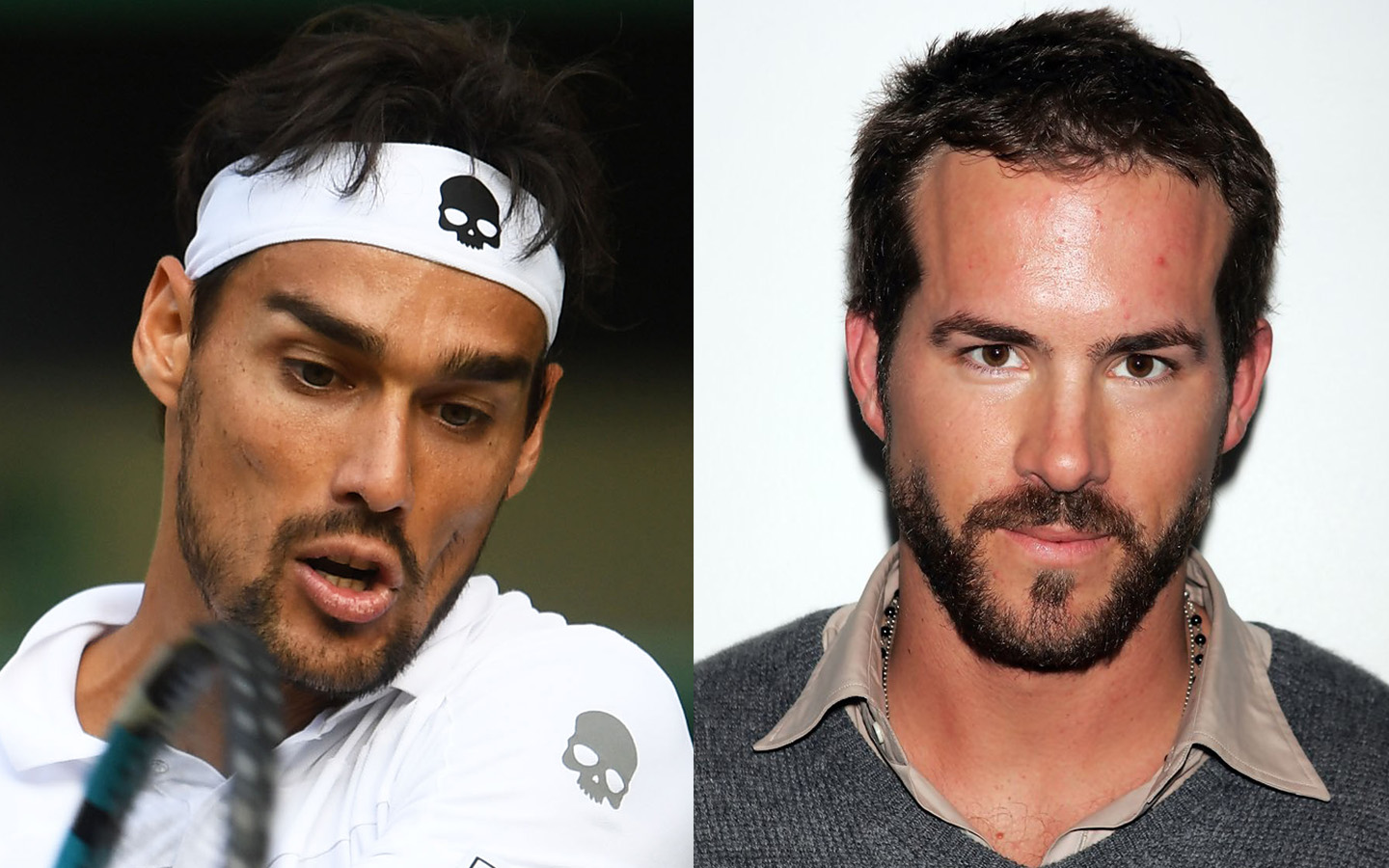 Fabio Fognini = The Ryan Reynolds “I didn’t know if I wanted beard or gote so I grew both”. Benoit Paire = The Gyllenhaal. “I don’t care that my face is mostly hair”.

And of course… THAT Andy Murray Tee
The day that Andy Murray rocked up to train in this witty little number was the day that my mind was cast back to the “#FireInTheBelly” Christmas jumper of 2014 and for that I am forever grateful. 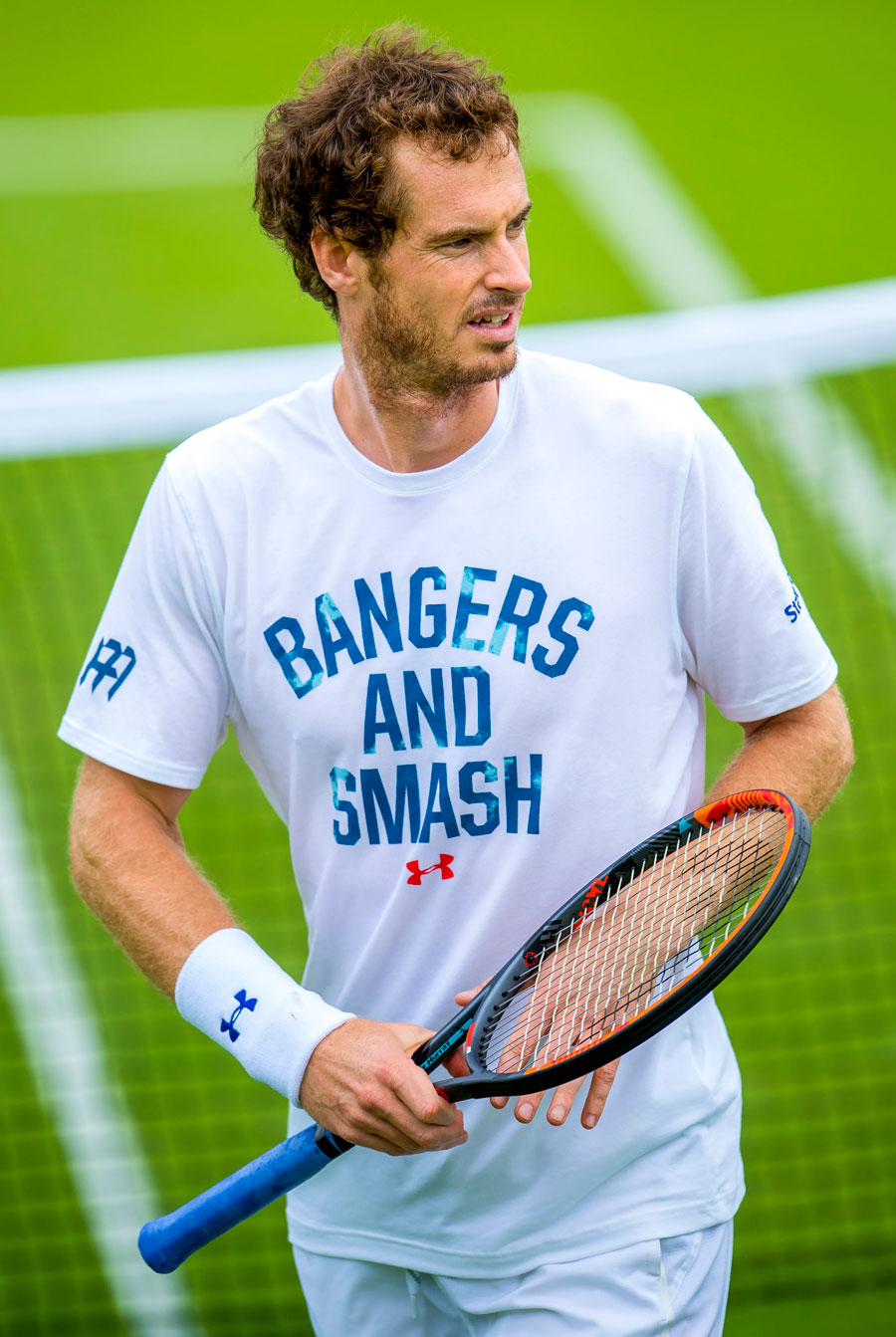