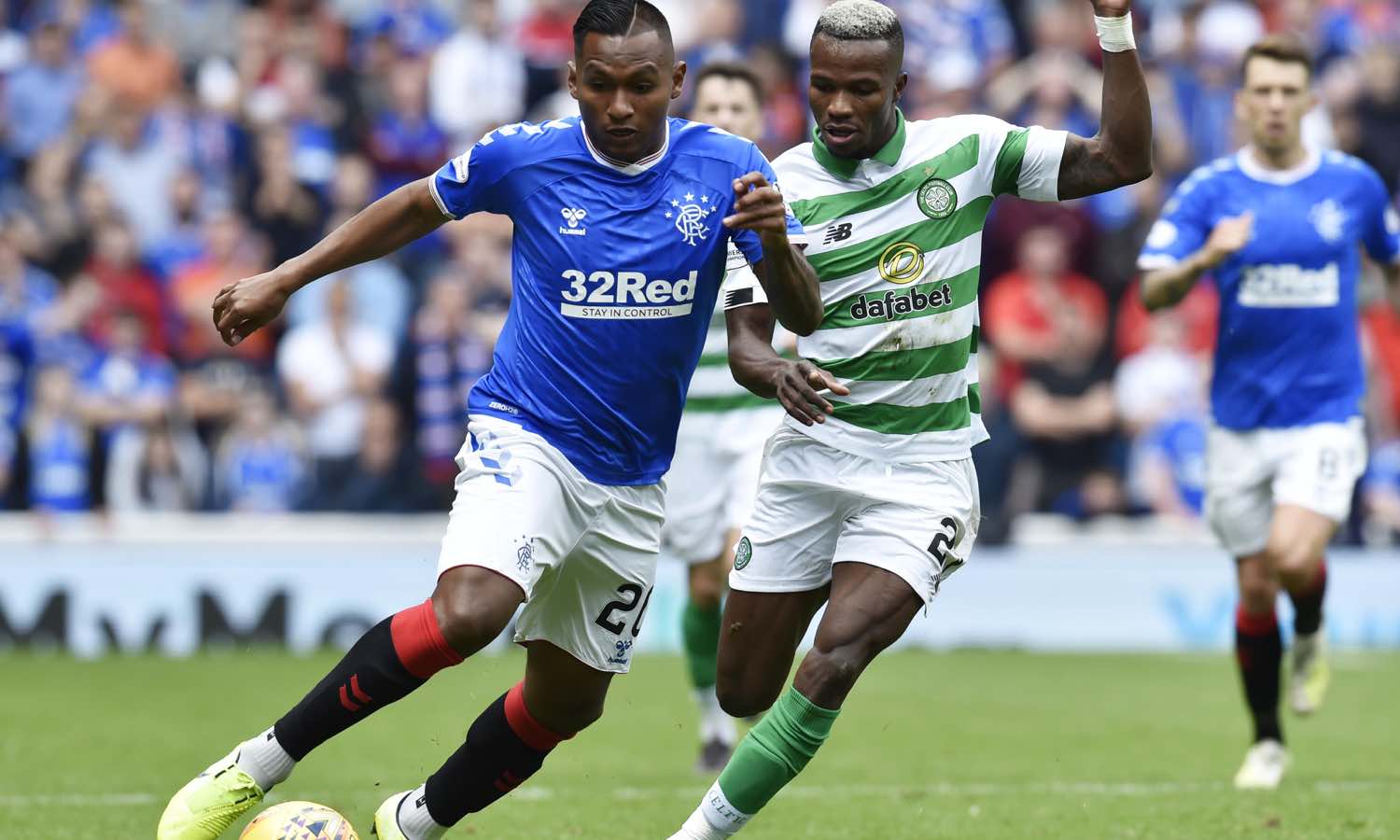 Rangers v Celtic, Celtic v Rangers, the Old Firm derby. The pinnacle of the Scottish football calendar, one of the most renowned games in world football, up there with Boca v River Plate and Real Madrid v Barcelona. It’s a game I’ve watched on TV as a neutral (Dunfermline fan) since I was a child, obsessed with the beautiful game. The two biggest clubs in Scotland going head to head for the bragging rights in the West…. And the East, and the North, and…..well you get the drift.

When I first started working for SNS 18 months ago, my target was to work hard in order to get the opportunity to shoot the big events, whether it be rugby, football, golf etc. Top of that list was to photograph an Old Firm game. I genuinely thought my boss, Anne Harvey, had called the wrong person when she said “We’ve got you down for the Old Firm on the 12th”. She hadn’t, she was deadly serious. I think the term amongst the kids these days is “Buzzing”! I was absolutely delighted to be given the opportunity.

I’ve had the pleasure of photographing a number of big events for SNS in my short time with the company. Aberdeen’s Europa League campaign included a trip to The Ljudski vrt stadium where 14,000 fans produced an atmosphere of what felt like 40,000 as Aberdeen unfortunately crashed out of Europe to Maribor. I also recently had the pleasure of travelling to Paris to photograph Scotland take on France in the Stade de France in front of 80,000 people, which was another incredible experience – despite the result. I had a feeling this would top the lot though.

Sunday arrived and I was up and about by half six. Partly due to the excitement of the game but mostly because we’d planned to meet at Celtic Park at nine for the midday kick off. My specific task pre-match was to man the front entrance where I would be on the look-out for any special guests, namely new Rangers manager Pedro Caixinha who would be making an appearance. And appear he did, sneaking in a separate door as the Rangers team arrived. I managed to grab a frame of him walking in, before I went mingling amongst the Celtic support to photograph the fans draped in their customary green and white colours and get a flavour of the occasion.

I headed inside and prepared my kit, setting up my 400mm lens and placing it along with my PeliCase filled with spare batteries, my laptop and various chamois’ incase the rain came, next to my seat that I’d put out when we first arrived to reserve my space. I then made my way to the tunnel area where my colleague Craig Williamson had his eyes trained on the Directors Box of the Main Stand, on the lookout for Mr Caixinha, Rod Stewart, Alan Pardew and other notable guests that appeared.

As the teams emerged from the tunnel, the noise inside Celtic Park was deafening. Both sets of fans were in great voice and clearly up for the game. Celtic went into their familiar huddle as the fans held their scarves aloft and sang “You’ll Never Walk Alone”. This was a moment that would usually put the hairs on the back of your neck on end but in all honesty, my only thought was of getting myself round from the tunnel to my seat on the far side so that I didn’t miss anything as the game kicked off! 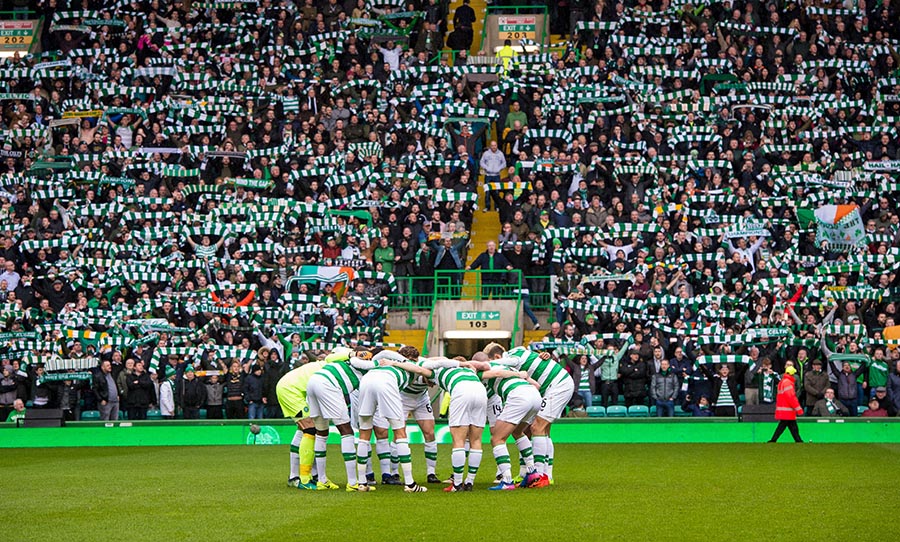 Once the game began any nerves or excitement I had disappeared as I was so focused on the job at hand. The first real chance of the game fell the way of Rangers with Martyn Waghorn breaking through the Celtic defence only to be thwarted by Craig Gordon. As I was on Rangers attack for the first half, as he raced through I was on him the whole way and when he pulled the trigger I was certain it was going to be 1-0 and there was a chance he’d be coming my way to celebrate. The Celtic keeper had other ideas though! 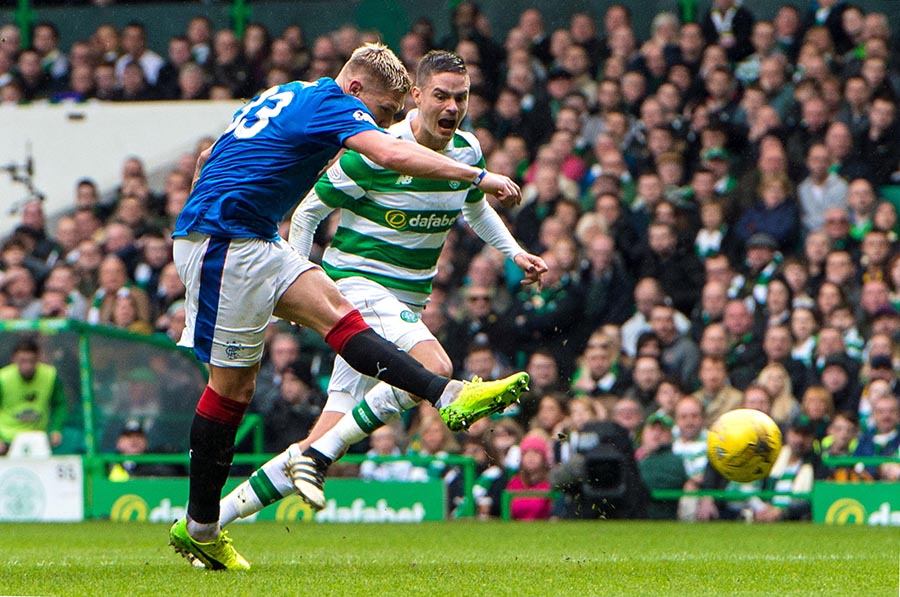 During the game, the photographers had the misfortune of pitchside stewards walking up and down in front of us, partially blocking our view of the game and at times stopping in front of us to watch the action – much to our frustration. This is something I’ve never really encountered at a football match before and it shows the heightened security of an Old Firm game.

Where I was positioned also meant the the ballboy, who was sitting right on the edge of the pitch partly blocking my view. Sods law that it would be the part of the pitch that Stuart Armstrong would fire his side ahead from! Blocked on the goal in my first Old Firm game, not the best. Something I had no control of however so I just had to move on. For the remainder of the first half, the Celtic support ramped the noise up a couple of levels and goaded their city rivals. The atmosphere was sensational and the view from where I was along the North Stand, where it seemed as though every single fan was singing and dancing, was something I’ll never forget.

Half time came and it was time to head into the photographers room to get some pictures away. We usually live-send pictures straight from the camera to the picture desk during a game but with 60,000 people inside the stadium this can prove difficult. For me, being the wrong end for the goal, it was a case of sending some action, Waghorn’s chance and some pictures of Brendan Rodgers from just before kick off. For the second half I would be on Celtic attack, which would be more fruitful surely?! 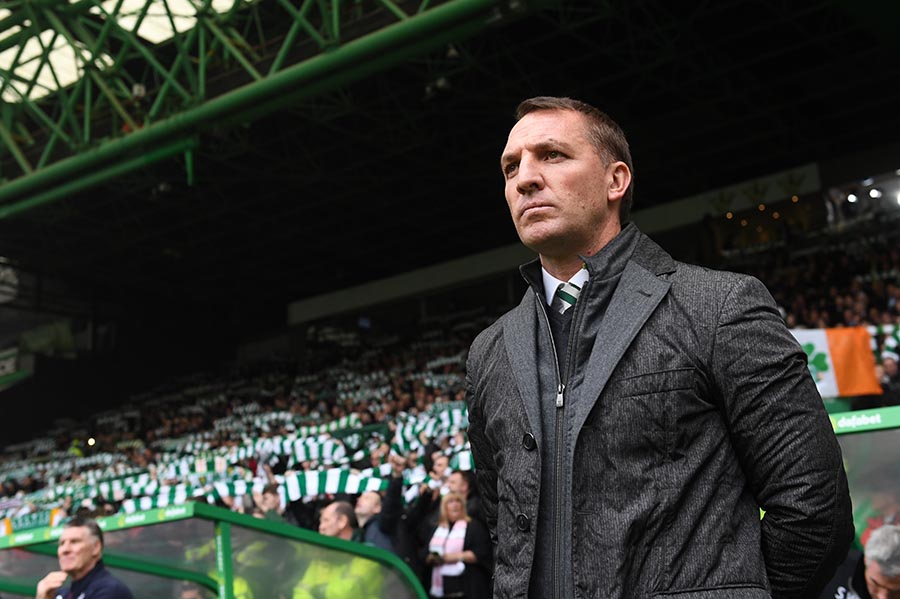 As the half progressed, Celtic passed up a couple of chances with Dembele firing across the face of goal and Armstrong forcing a good save from Foderingham. But Rangers’ confidence seemed to grow and they eventually equalised late on through Clint Hill. Another Old Firm goal where I was at the wrong side – I did, however, manage to get this one from the other end!

As the celebrations were happening right in front of my colleagues, positioned at that end of the pitch, my focus was to shoot dejection of the Celtic players making their way back up the park which worked out relatively well. Scott Brown trudged back looking forlorn as the Rangers fans celebrated, creating the backdrop for a picture which showed a contrast of emotions. 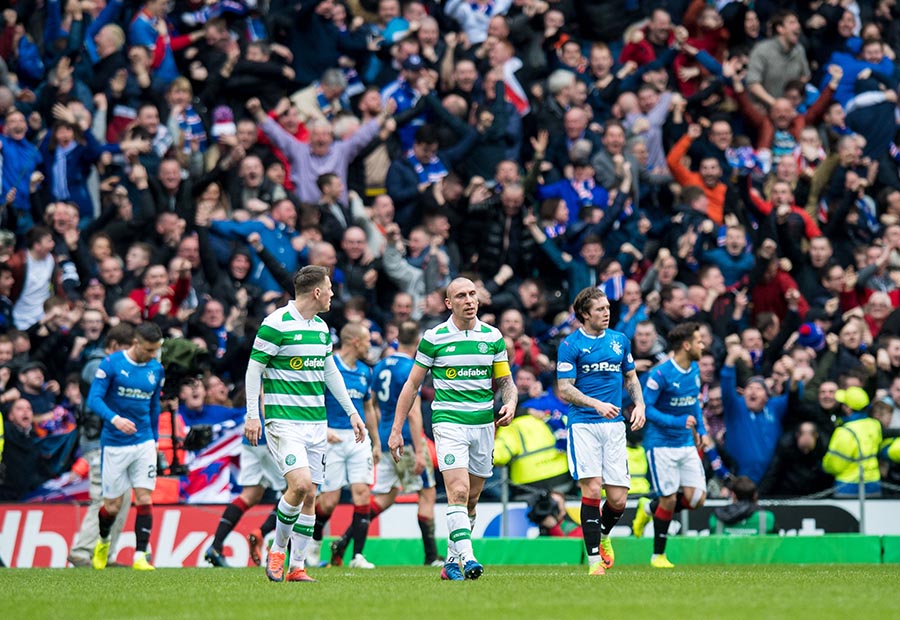 With only three minutes to go, surely the game would close out without incident now? Wrong again. Leigh Griffiths made his way into the box and I was focused on him as he positioned his body to pull the trigger and give Celtic the three points. However, Rangers’ goal hero Clint Hill’s outstretched leg went through Griffiths preventing the striker from scoring whilst wiping him out in the box. A strong penalty shout for the Hoops not given by referee Bobby Madden and at this point the atmosphere really turned with the Celtic fans voicing their frustrations towards the whistler in no uncertain terms.

At full time I focused on Celtic players making their way round the pitch as they applauded the fans, most of them looking dejected at dropping points in the last few minutes. I then made my way back to the photographers room to work my way through my pictures from the game, sending in a variety of dejection, action and any other images I felt were relevant.

Once they were sent, I sat and took stock of it all. My first Old Firm game. Both goals were at the other end of the park, and all I really had to show from the game was a few reasonable action pictures and some dejection images of the Celtic players at the end. 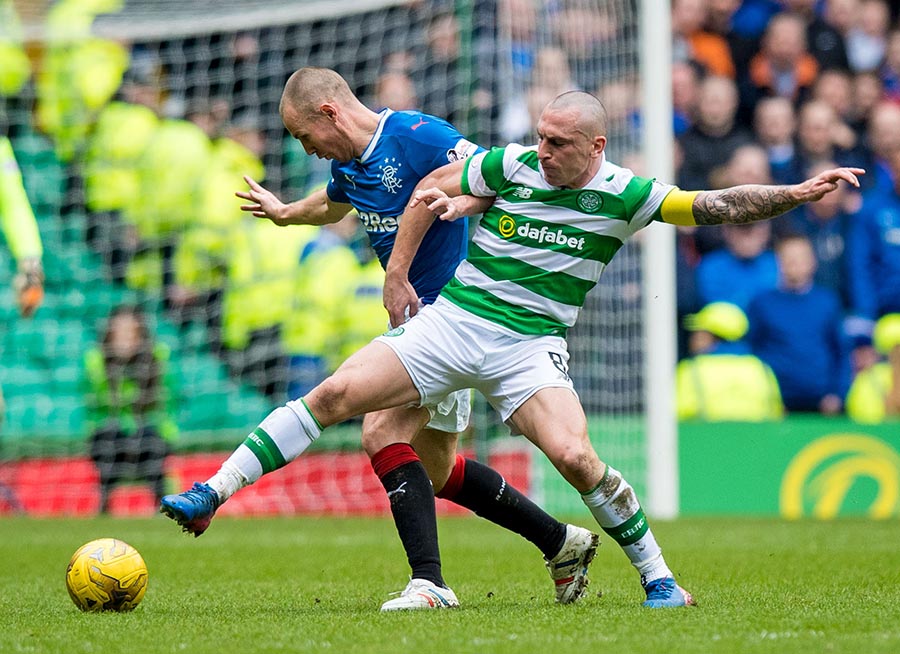 However, the experience itself was incredible and my colleagues who were better placed for the goals got some great shots which would adorn the sports pages on Monday morning. It’s a team game after all!

Overall, an incredible experience and one more that I can tick off the bucket list and say I’ve photographed an Old Firm game. I can only hope that the next time the opportunity comes that the goals come at my end of the pitch and I get the chance to create a really memorable picture from such a big match.